is creating video tutorials about Stereo 3D imaging
By becoming a patron of Frank Pohlmann you'll be an active participant in their creative process. 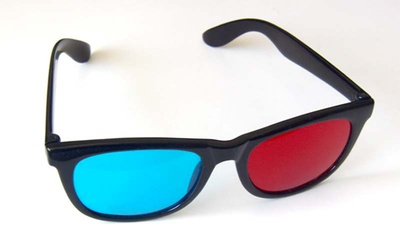 $1
per month
Join
Your support is important for me. Thank you so much.
You now have full access to my -patron only- content.
$10
per month
Join
1. one print ( postcard size)  of my artwork  to your home ; in full Stereo 3D and with one pair of cardboard 3D-glasses. 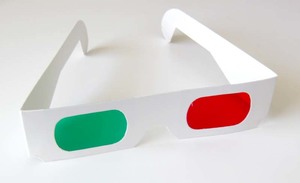 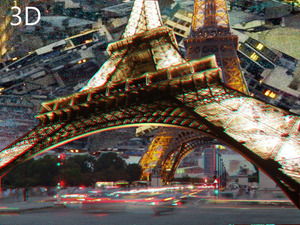 This workshop will get you started in 3D Stereo Vision. Its main focus is on all practical aspects of 3D Stereo imaging. It is aimed at movie makers, photographers and artists alike.

The Stereo 3D format is becoming quickly the new standard behind the upsurge in 3D cinema and advertising.This course offers you a quick and practical access to the world of 3D Stereo design.
No prior knowledge required. Questions addressed :
How does 3D cinema work ? How can I capture 3D pictures myself? What hardware do I need? What software? Do I need to wear 3D glasses? What is the market for 3D designs?

American Paper Optics
you must get anaglyphic 3D glasses  red/cyan


We all know Stereo 3D from cinema, but there is more to 3D imaging than just the movies.
For example Stereo 3D images can be displayed on a canvas. When viewed with 3D-glasses shapes and colors emerge out of the canvas and interacting with the viewer. The canvas acts like a membrane between the viewer and the 3D world emerging from it.

My vision : unlocking the artistic potential of Stereo 3D and bringing it to the art gallery.

3D stereoscopic artwork is concerned with the dimension of depth. When viewing images with 3D glasses,the spectator will be able to touch colors and shapes emerging from the canvas,revealing the dimension of binocular depth.
Human beings are binocular, we perceive our environment with two eyes, mounted approximately 6.5 cm apart in our skulls. Binocular vision enables us to perceive depth and to look around obstacles. The french philosopher Merleau-Ponty called depth the first among the three dimensions, setting it apart from length and height. Whereas the latter only juxtapose things in front of our eyes, depth lets things overlap. This overlapping and partial occlusion of things in our visual field is dependent on our viewing point and by this fact establishes a relation between the objects and ourselves.
Despite the existential importance of depth to human visual perception (Merleau-Ponty) it does not play any part in the tradition of fine arts or even photography. Sometimes depth is confused with the sense of the 3ed dimension, as achieved in perspective painting or (automatically) in photography. But the sense of the 3ed dimension in perspective painting is a purely monocular sense of ‘depth’. It does not give the same quality of visual experience as in true binocular vision. The visual experience of the ‘3ed dimension’ is not comparable to the experience of binocular depth. Both visual senses are fundamentally different in quality, similar to the difference in quality of tasting and smelling.
It is time for the fine arts to pay more attention to the visual sense of binocular depth. Nowadays stereoscopic displays are confined to the cinema screen, giving binocular depth the ‘Hollywood treatment’. But this visual sense has so much more potential. Here just one example to demonstrate this point. The visual experience of stereoscopic displays are strongly dependent on screen size and display medium. Objects will emerge off the cinema screen, floating mid-way between the screen and the viewer. However the floating objects are still out of reach, out of arms-length, for the viewer. A similar image displayed on a fine art canvas will produce objects directly floating in front of the viewer, at arms-length and at touching distance. This gives the image a tactile quality, which is missing in the cinema setting.
With my artwork I try to explore this fascinating new visual experience, the interaction and fusion of spaces displayed on the canvas. To simulate binocular vision in stereoscopic displays, two different images have to be presented to the left and right eye. Currently this is achieved by displaying both images simultaneously on the canvas/ screen and then to filter the individual images into the left/right eye by use of 3D glasses. In the near future (10years) auto-stereoscopic displays will be available, allowing the viewer to enjoy binocular imagery without the discomfort of wearing 3D glasses.

All of my work of art are unique and not derived from any other sources. I do create movies and still images in stereoscopic 3D.
When viewed with 3D-glasses the screen or canvas transforms into a 3D world. All of the 3D images presented can be displayed on canvas and viewed with 3D glasses. For best viewing use an iPad or any other high resolution screen. Some of my artwork is anamorphic, that means the image has to be seen from a definite angle from the side or from above.The 3D effect is proportional to the size of the image and also changes with viewing distance. I recommend to view images on an iPad and to adjust position and magnification until desired effect is attained.

$0 of $250 per month
Stereo 3D images look best printed on canvas or fabric. The images acquire a magical presence when displayed on a permanent surface, as opposed to a digital display.Printing costs are very high because the images require a high quality RGB-print. My aim is to assemble 20-30 printed images for a gallery exhibition. 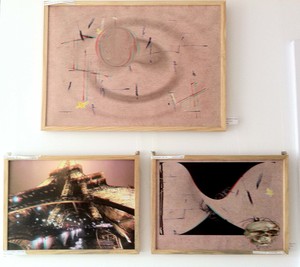