is creating Animated series on the Olympian Gods #greekmythology

Thank you for your support! Get access to my Patreon exclusive updates:

Gods'School is a personal animated webseries project of 25 episodes x 12 minutes, on YouTube! Help me produce more episodes by supporting me on Patreon! 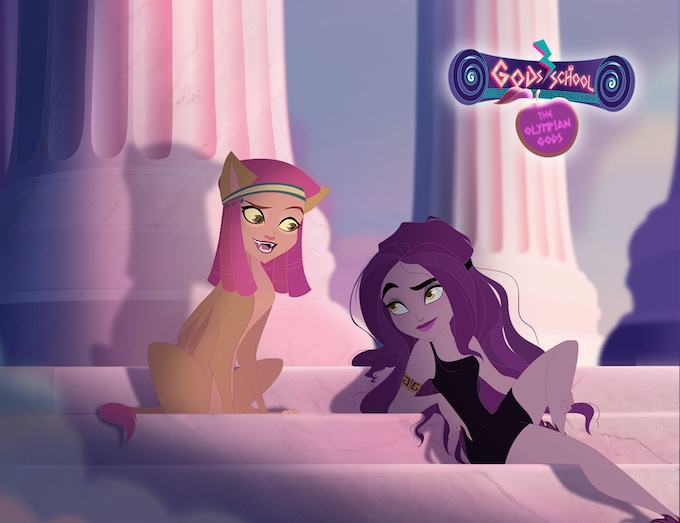 The series tells the story of Eris, a young goddess who tries to find her place on Mount Olympus,
until she meets a mortal. The whole show is an adaptation of greek mythology.
On Mount Olympus, in the peaceful sanctuary of the gods, Eris is a dark spot; an unpopular and sometimes tactless goddess who doesn't control her powers. Although she understands the stakes of her kind, she doesn't care about being worshipped and she is determined to live her immortal life on her own terms. Eris stays away from the other gods. Fortunately there is someone she can count on: Sfiga the Sphinx, her fierce ally and future mythical pest. But their cosmos suddenly turns upside down when a young mortal arrives on Mount Olympus! The arrival of Paris will allow Eris to reconnect with her world and leave a clear and indisputable footprint behind her.
But Hera, the undefeated queen of the hallways, is ready to do anything to preserve the order of Olympus. One day she will become a goddess worshiped by everyone! And she doesn't want to see her dreams of glorious temples disappear because of a minor goddess and a mere mortal!

Every contribution on this Patreon will help me to cover the production coasts of the episodes. Gods'School is a personal project and I couldn't make the episode without your help!
So,Thank you! Ευχαριστώ! Merci! for your support! And feel free to drop me a note  if you have a question ;)