The MUSEUM of 2D ANIMATION

The MUSEUM of 2D ANIMATION

is creating a living center for traditional hand-drawn animation.

At the $2 a month level, for a minimum of 1 year, your name will appear on the dedicated "Sponsors & Volunteers" page of the Museum Website. (You will also receive lots of 'rewards in heaven' of course! - that is, IF we can make contact with the key production team up there and put in a good word for you!)

Ideal for animation fans of all types and ages!

At the $5 per month level, for a minimum of 1 year, you will receive the previous benefit - plus access to our website "Theater" - where you'll get exclusive access to all the private "films", "presentations" or "lectures" we'll be putting out for museum members as time goes by.

Ideal for serious students of animation!

At the $10 per month level, for a minimum of 1 year, you'll get all of the previous benefits - plus personal, professional "mentoring" for all submissions in our monthly "Animation Sketchclub" challenges.

The new movie "Klaus" is a rare 2D movie in the great tradition of exquisitely-produced, hand-crafted animation that once upon a time took the world by storm. This is a totally rarity in this digitally-dominated, 3D-animation day and age. This makes it a potentially "make or break" moment in the long, rich history of traditional hand-drawn animation. "Klaus" is a genuinely wonderful film and entirely swims against the tide of the in-built prejudice towards traditional 2D animation that exists in mainstream USA.


The Hollywood industry has effectively dismissed drawn animation since the Disney corporation closed down their legendary 2D studio in 2002. This event caused an entire industry to die overnight. It meant that not only did many truly remarkable artists and animators find themselves on the scrapheap, but it also meant that we lost a link in the chain, where young and aspiring 2D artists had nowhere to go to learn the necessary crafts and skills. They still don't!

The film "Dream on Silly Dreamer" - made by the highly talented Disney artists and animators of the time - tells how the great legacy of Walt Disney was cruelly killed off...


How surprising it is therefore that in an age when Hollywood has repeatedly told us that "2D animation is dead", "Klaus" not only cleaned-up at the "2020 Annie Awards" but also it's distributor, "Netflix", excitedly reported that almost 30 million viewers streamed the movie in its first month of release alone! This made "Klaus" one of the most popular opening releases of any Netflix streamed movie - making a lie of the statement that "2D animation is dead"! Clearly the public still loves to watch well made traditional 2D animated films and the awards and nominations that "Klaus" has received prove that the 2D animation tradition is still highly admired. So surely it is time to establish a unique resource center for traditional animators and filmmakers everywhere, that celebrates and supports the work they have done and still plan to do. We believe that "The Museum of 2D Animation"is that initiative!

Aside from the museum archiving and streaming traditionally animated films from around the world, another major part of the mission is to provide learning opportunities - even apprenticeships - for the young animators of the future through our “2D Academy”. The "2D Academy" will offer Lectures, Masterclasses and Online Tutorials for anyone who wishes to learn 2D animation, either traditionally or digitally. Let Tony White explain more about the "2D Academy" and it's plans in the future...

This online center for "all things 2D" will be a home of hand-drawn animation where not only the legends and achievements of the past will be honored - but also where the young talents of the present can learn and produce their ideas for the audiences of the future. The museum will be a place were individuals of all kinds and talents can participate in animation and where every resource necessary for the advancement of 2D animation skills and achievements can be found. Nothing like this has ever been established before and we wholeheartedly believe that there's a real need for it - now, more than ever! We simply need your support to help up bring the "power of the pencil" to the world...


"Muse2D" is the brain child of veteran animator, author and teacher, Tony White. Tony is an award-winning animator/director who has been extremely active in the 2D animation industry for over 50 years. He has been responsible for over 200 TV commercials, 2 TV Specials, a number of Short Films and created the legendary "The Pink Panther Strikes Again" movie titles early on in his career. Yet in all this time he has never given up his support for the art form he loves. Through his own "Independent Projects", through his respected "Animation Textbooks", through his “DRAWTASTIC Animation Festival", through his "Animator's Sketchclub" initiative and through his "teaching at the highest level", he has done everything he can to keep the flame of traditional 2D animation alive. Tony's books on animation remain as important textbooks for students around the world... 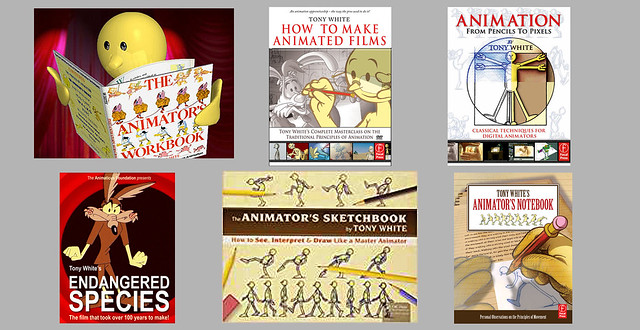 Tony's love for traditional, hand-drawn animation started when he apprenticed with some of the great legendary animators of the past - specifically triple Oscar-winner Richard Williams, master Warner Brothers animator Ken Harris and the "10th Old Man" of Disney animation, Art Babbit. Since learning from those great masters, Tony's own successful career has only increased his love for the artform. His film, "Endangered Species" - ironically created pretty much when the great Disney studio was closed - celebrates the "rise", "fall" and "hoped for rise again" of traditional 2D animation in the USA. Tony had instinctively felt the end of the Disney legacy studio coming. So he decided to give his students of the time a chance to experience just how a hand-drawn animated film was made. So, despite having a $0 budget to work with, Tony set up a "special credit" production class where students could effectively "apprentice" with him while making "Endangered Species"...


But Tony’s biggest dream has always been to establish some kind of multi-purpose center of traditional 2D animation - where not only the great work of the past is celebrated and shown, but also where the young and aspiring indie 2D animators of today can learn and produce their own work for the future. Indeed, Tony has a fine record in taking minimal support and turning it into outstanding results. For example, to make his first ever short film, "HOKUSAI ~ An Animated Sketchbook", he accepted the support of the British Arts Council and won a British Academy Award in the process...


To see the museum website, still under construction... https://www.2dmuseum.com.

Finally, we thank you for your generosity in supporting us!

Recent posts by The MUSEUM of 2D ANIMATION