is creating a Web Series/Variety/Talk Show for Voice Over Artists.

Social Media Follow/Behind-the-scenes access!
$5
per month
Join
We follow you on the social media platform of your choice (Facebook, Instagram, Twitter) and will give you an individual post thank you! Please include your handle/url at checkout! You'll also be granted access to exclusive behind-the-scenes photos, scripts, etc!
Exclusive Content!
$10
per month
Join
We post content every week, but we've got plenty more where that came from. Gain access to all of our VIP content, which includes outtakes, and lost segments, and live streams, some of which include your favorite VO Show guests! You'll also get everything from tier 1!
You're on the VO Show!
$25
per month
Join
With your monthly contribution, your name will be specially featured in the end credits of our full length feature show and you'll also get everything from reward tier 1 and 2!

Hello Patreon! I'm Lenny Mosco, and I'm the host of The Voice Over Show. Being a long time fan of voice actors in Animation, Video Games and Film, I decided that these amazing entertainers should have a Talk Show platform where the fans can really see and hear their favorite Voice Actors, learn all about them, learn how they got their start, hear about what they've done and what they may have coming up. Voice Actors do an incredible job and their voices are heard and loved by millions of people, but they are not often seen in front of the camera.... until now! Along with my co-host, Xavier Gonzalez, we aim to give you an exclusive inside look at the world of voice acting, that is as informative and interesting as it is light-hearted and fun!

As we close in on nearly a hundred videos to date, check out just some of the fun we've had below. Also be sure to check out our full channel here.We visit your favorite cons and get exclusive interviews with stars from all walks of the entertainment industry.
Goofy himself, Bill Farmer, stopped by the studio for some fun.
Our 'Listen Back On' Series highlights vo artists that are no longer with us, like Wayne Allwine, longtime voice of Mickey Mouse.
Friend of the show Alana Bridgewater, voice of King Dice from Cuphead
80's Cops, one of our original shorts, which also starred Kellen Goff from Five Nights at Freddy's.
Episode 2 featured Five Nights at Freddy's voice actor Kellen Goff

Episode 1 with League of Legends' Dennis Johnson
Producer/Writer Patrick Appolonia has established a format for the show that combines elements of a modern talk show but boldly incorporates sketch comedy, digital shorts, and games. This allows viewers to see their favorite voice actors in ways they never have before. With candid conversation-style interviews and custom made episodes to fit each individual guests' personality, The Voice Over Show will be a surefire hit with fans.

The reason we are reaching out to you: We have amazing ideas for where we aim to take the show from here, and we've set the bar high! We strive to make the show about you, the fans. We have assembled a great production crew, who are diligent and believe in this project as much as we do! They've contributed many hours planning, rehearsing, and shooting, to make The Voice Over Show the high-end production that our fans deserve! Much time and energy has been invested knowing that this is something we all believe in, and we intend to make good on our word that The Voice Over Show will be the best show of it's kind...period.

Where your money is going: We believe in absolute transparency in this matter. Any and all money donated to the Voice Over Show goes towards production costs, compensation for extra crew members on our set, and most importantly, paying the voice actors for their time to come to our studio and have fun with us! 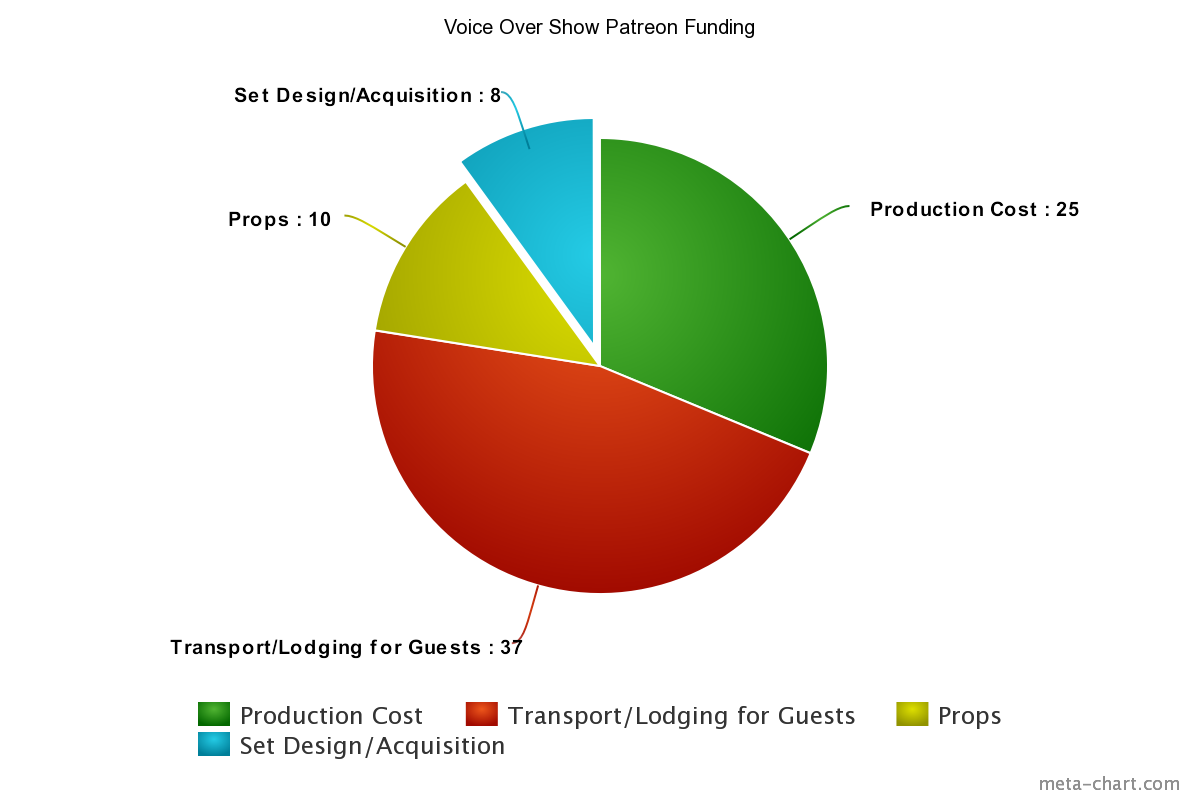 In Conclusion: By helping us to continue doing what we do, we can provide you all with the kind of show you deserve! So tune in, listen in, and let us entertain you!