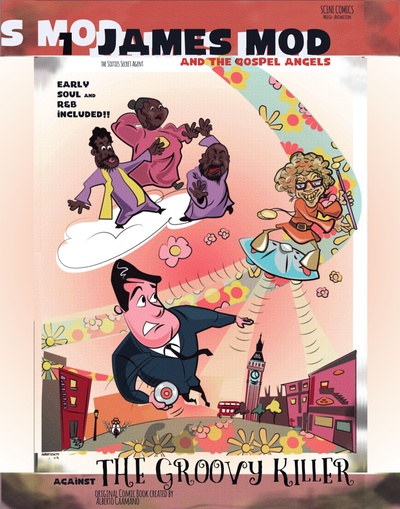 $15
per month
Join
Join the gang with an outstanding character full of braveness, ready to encourage others to fight with him whatever the circumstances are, in the name of Soul and for the Mods!..but surprisingly all these features could be made secondary when a force bigger than anything else use His servants to defeat the evil one of the story...

born a few years ago..by the late winter on 77..uff am I vintage?..yes maybe for sure!
Always fan of drawing, comics and all related to characters in tiny strips.. The life took me in other ways but some years ago I decided to achieve a foundational and degree in some arts like Illustration and Animation in order to complete personal achievements within the art I loved. The UK was my main base and since then I moved to the neighbour isle oF Eire

All about this project, is the challenge of starting within the comic industry and animation, as a recent Illustration student, I enjoyed very much creating a story, based on an old fashion youthness movement where is taking the lead, a freaky friendly character to be the one who gets involved in the core of the stories as a secret agent.
No one else had tried to represent the Mod history so far into a comic or animation, even the Mod movement is on the way since decades into fashion, films music and media.
So this is the character and this is the story..the purpose so far is to start a new challenge in the Illustration industry within this comic, and the aim to start regularly creating comics of James mod and the goal of making some film animation in the future.
To do that the intention of the foundational money goal is covering the expenses of publishing the printed comic to deliver it for the bidders with a minimum profit. The idea is the possibility of creating an Illustration agency or studio and taking some collaborators, freelances or directly to hire some workers to make 'The Scene' studio possible.
For that a big goal would be necessary, as the budget to run a business in this matter within the creative industry is not something easy, but reachable, the intention to me is to evaluate this chance within the project itself.