is creating writing focused on uplifting marginalized voices and issues

It's no secret that the literary world and world of journalism remain largely homogenous. In 2015, Lee & Low Books published the first set of data exploring diversity within the publishing industry and found found that 79% identified as white. And while those facts are alarming, the diversity in mainstream media newsrooms are, unfortunately, quite similar. Even as publications increasingly sound diverse, many of the editorial staff don't reflect those diverse voices yet. In the case of our beloved NPR, their newsroom has remained 75% white since 2012—only two percent down since 2012. And Latinx newsroom staff? Only 6.1% in 2017, ranking below Asian and Black reporters. 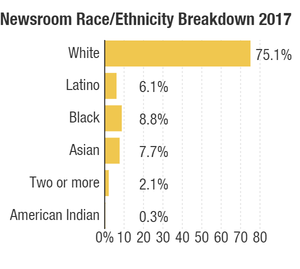 In Portland, openings for staff writing positions are few and far between, with many listings looking for editors rather than writers. With so many paths left to explore as I wind my way towards a career, I really enjoy writing different content and stories depending on my mood. Community profiles are definitely my strong suit, but I enjoy writing personal essays about biculturality and latinidad or the intersections of race, media, and eating disorders. Other times I prefer pop culture critiques, stories about undocumented activists creating awareness with art, music journalism, and features on thriving LGBTQ communities by and for POC. But what I haven't been able to explore as readily yet are deeply researched, investigative work and personal creative works not tied up in the need to get published.

I'm interested in more closely studying trends or patterns of a subject and drawing conclusions as they relate more broadly to the world. The thing about freelancing is that I'm not incentivized to research for long periods of time. Freelance writers are paid on a per word or flat fee basis. While some publications pay higher rates for investigative work, breaking into that niche of industry still requires me to put in hours of time without a guarantee of pay off. Staff writers are supported and can rely on steady income when working on larger, longer stories, but freelancers can't. Creative writing rarely pays, and writing a manuscript just doesn't pay at all (before you get a book deal.)

This is where I hope you will come in. Although my work already focuses on uplifting the stories of folks from marginalized communities in music, art, and social justice, I want to dig deeper into stories that still matter but just require more time—both for me and for the world. I've launched this Patreon account to help create a source of steady income while informing you all about the work that you're directly helping me in creating. To give you an idea of what I'd like to work on in the near future, here are a few feature story ideas I really want to write, but haven't had the time to dive into:
With your support, I can have the assurance of some financial security and stability in order to pursue these bigger stories. Literally anything helps. Thank you for your consideration.