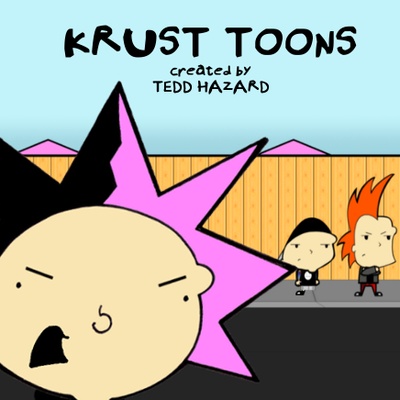 Free pins, free stickers! Basically whatever I have.

Hazard Studios is a web comic publisher and animation studio located in Hazleton, PA consisting only of myself, Tedd Hazard.

I've been working on comics since 2002, doing my first book, "Chewy", in a god damn composition book. These days, I've been published in such magazines as Maximum Rock N' Roll, The Deli, and more. I've worked on such comics are Tedd and Simon, Captain Anarchy, Life is Pain, The Coatrack Chronicles, and Chester.

These days, I work on 4 different web comics: Krust Toons, a daily comic based on the DIY music scene which also has a weekly column in The Deli Magazine, Whine and Dine, a daily comic based on the food service industry, Wrestlevania, a bi-weekly wrestling comic, and now, Ignorance is Bliss, a workplace/relationship comic that shows a warped yet accurate depiction of the modern day millennial lifestyle.

So why do I have a Patreon page? Well, believe it or not. I make little to no money on this. I've tried doing the syndication/magazine thing. And though my work is good, it just doesn't fit in with the Sunday paper, or any kind of magazine that makes a decent amount of money to pay it's employees.

Basically, I put mostly all of my free time into creating these works. And don't get me wrong. It's fun. I love doing it. But bills add up. And doing commission work isn't something I enjoy doing. I have a lot of stories I need to tell in my head. And if I'm working on something that isn't necessarily my own work, I get extremely depressed and feel very unfulfilled. It's stressful. Especially with working a day job, which eats in to my time to make comics/cartoons.

I'm not asking for much. Donate as little as a dollar a month, and I'll keep putting out comics. I'll do my best to put out cartoons. And I'll give you free merch. That's basically it. I'm working on these things 24/7. Always thinking. Always writing. Drawing when I can. Your support means a lot.

1% complete
I'll begin releasing anthologies of my work.
1 of 2