Onesies
$1
per month
Join
I will send you a card every year for your birthday, holiday, or any date or occasion of your choosing.  Or randomly.

Also I'll put some things into the patron-only feed.  Things too exciting to even describe or mention.
Spiders
Limited (96 of 100 remaining)
$3
per month
Join
I will draw a thing for you.  Requests are welcome but not necessary.  I reserve the right to reject or disregard requests I don't like but I'll do my best.

You also get a card every year.

Voyeurs
Limited (13 of 15 remaining)
$5
per month
Join
I will record a video of myself dancing to the song of your choice.  I reserve the right to reject songs that I hate or totally don't want to dance to, but I will try to extend my limits.

You also get a card. 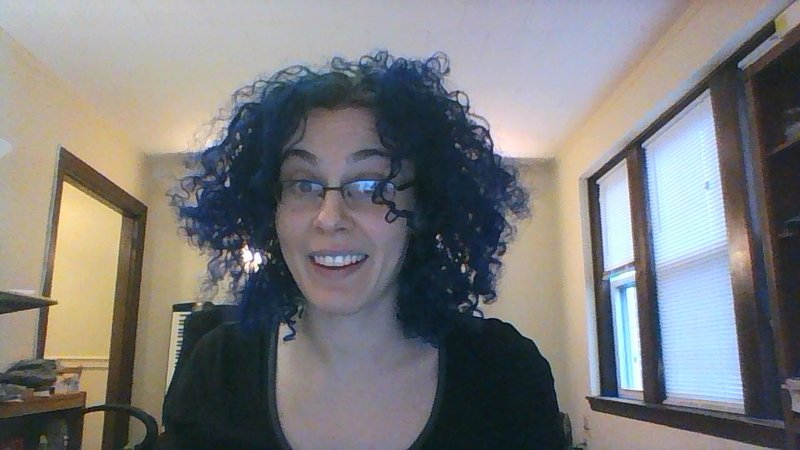 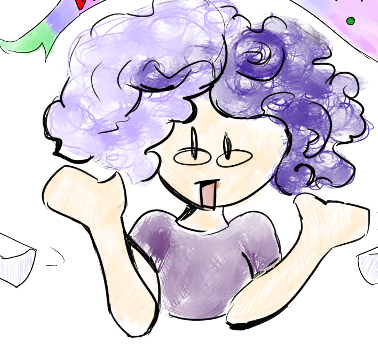 UNCANNY.  Which is the photo and which the cartoon??
I'm so good at drawing myself I can't NOT make journal comics. (Note: I cannot draw anyone or anything else.)

And so I was compelled, one may even say fated, to draw little episodes and vignettes of my fascinating life and inner thoughts.  I may seem strange but if you keep reading you'll discover that on the inside, I'm just like you: I have a job as a programmer, I do math in my spare time, I like cats, goth and rave dancing, weird sea creatures, and I am in a constant existential crisis.  Yes, I am the epitome of relatability.

I am satisfied when I make things, but I'm not a capital-A artist.  I work as a software engineer, but that doesn't have capital letters either.  What this means, though, is that I make enough money to live and I'm pretty satisfied doing so.  I don't aspire to make a living through art.  I don't even want to make money from it, due to my idiosyncratic personal philosophy about art.   Therefore, all proceeds from this patreon are going to go to charities.

There are four charities I've already signed up to donate to out of my programming paycheck:
Against Malaria Foundation
Give Directly
Doctors Without Borders
Schistosomiasis Control Initiative

Initially, I will match all patreon profits, e.g. if I get $20 through patreon, I will take it and donate $40, divided evenly among the four.  This obviously has to have a cap at some point since I only have so much of my own money to match with.  I understand that this will unfortunately will create diminishing returns past that cap, but I'm not worried that I'll reach it just yet.

Note: rewards above $1 are basically one-time commissions, restricted to a certain category, or un-restricted for $10+.  All patrons of any level get a card or postcard from me once a year (guaranteed at least once as long as you are a patron for at least one month).  This can be for a particular date, and/or a particular occasion, or just whenever the spirit moves me.  I'll be asking if you'd like something in particular (i.e. your birthday, and then a birthday date, or something about snakes at any time) when you sign up.

(Long Version, extra details)
I deal with the horror of existence through the lens of art.  Unfortunately, I'm not particularly driven, so I don't actually devote enough time to creation to end up with anything of use beyond my own amusement.  This mostly suits me, as I consider art to be more of a personal practice than the mode of producing a commodity.  Insofar as it's at all like self-expression, then it's really for me and not for you.  So although I desire to become more skilled and productive, I rarely find the energy, drive, or motivation - I can not fully justify the devotion of the necessary effort to the activity.
But it's a useful therapeutic exercise, and I wish I did more of it.  Ideally, I would put my time and energy and skills into something that I wouldn't have as many doubts and uncertainties as to the value of - some kind of "contributes to society by advancing medicine, technology, or standard of living" kind of thing.  But I don't seem to have gotten there either.
So, amid much internal struggle about what I should be doing with my life, I have reached a compromise (probably temporary, but better than how I was previously).  I will continue to earn my living as a software developer, hopefully keeping to software that seems to serve some kind of useful purpose other than its own perpetuation.  But for art, essentially to motivate myself, I will set up this page, and all proceeds will go to charity.

I consulted givewell.org, and with a mixture of their recommendations and whatever seemed sensible to me (I'm not confident enough of my own instincts or established methods to do some 100% calculated method, but instead have done a rather wishy-washy compromise that is guaranteed to not be optimal, but as this entire enterprise illustrates, I try to not let the perfect be the enemy of the good), selected a number of charities that I am already donating to, listed above in the "Short Version" section.   Patrons are welcome to comment and discuss about implementation details, such as:
- how to deal with reaching my matching cap, should such an event occur
- how to best divide donations among selected charities
- which charities donations go to (My selections are for starters, but I'm definitely willing to give to others.)