is creating "The Norm" comic strip

A buck a month 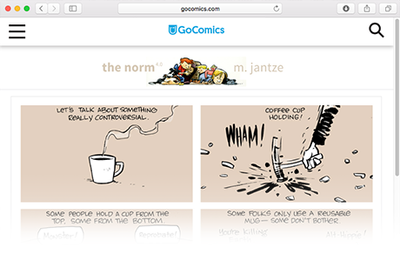 $1
per month
Join
You will become an official patron of the comic arts. For supporting my work, you'll support:
Studio Hangout

This reward gets you a monthly pass to hang out in my studio. I'll set up a YouTube Hangout, you come by, I draw, we chat. If there's a sketch to give away, it's given away! Also, you get:

Your name will be added to a monthly drawing to receive some of my studio trash. It may be a sketch or a receipt or even a scrap paper with math on it, but it'll be yours forever and forever!

You will also receive the benefits of the $1 and $5 Tiers.

I believe cartoons speak to people more easily than any other form of art, with economy and accuracy, to get to the heart of the matter and do it with a laugh.

My Patreon goal is to fund the The Norm® comic strip, a continuation of my syndicated comic The Norm, published since 1996. In 2019, I want to use your collective support to reserve more time to make comics and comic collections. THE NOW
In 2019, I'll focus my energy on making  "The Norm 4.0" comic for GoComics and getting the first comic collection printed and distributed. Which we did!

“The Norm in Color,” "Knocked Out Loaded" and “The Norm 4.0” print books are sold at Jantze.com.

THE 2019 BENEFITS
The Norm 4.0 is published at gocomics.com/jantze. Norm and Reine have two kids, two jobs, two dogs, two sets of parents and too much to do. Sound familiar?  The Norm Classics are also on GoComics on a separate page. Your support here keeps the comics there free.

Exclusive peeks: If you support at the $5 TIER, you also have access to my monthly studio hangouts. The $10 TIER gets you on the list for my studio trash. The $25 TIER gets you one original strip every 12 months.

It's an open dialogue, please stay in touch and let me know what you like and don't like. And to all of you who have supported me these past years, thank you so much!