is creating a Cartoon Series about: Self-Doubt in Your 30's

for if You Want to Chip In 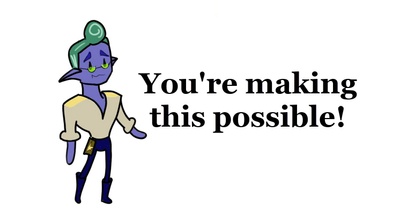 $1
per month
Join
I'm finding a way to bring this project to life.

Given the chance to produce this series with better tools, I will have what I need to keep production moving forward.

If you want to help chip in to cover the costs of creating this project, you can pledge any amount per month (though if you are looking for a guide $5 - $10 amounts are customary).

The money goes toward tools to build this series, and education costs I have to finish training up my skills so I can get this project launched.

There are Patreons who would give you prizes and rewards for supporting their projects but at this time that would drain energy away from the main project and so the only reward is knowing you helped, but if that's enough for you then I welcome your support.

Heartbroken Alvin locks himself into a Bad Business Deal.
Each episode is about him confronting a different sub-personality (Slacker Alvin, Panicked Alvin, Vane Alvin) who want him to quit.

He chased his dreams, and quickly found out that nobody had prepared him to be his own boss; turns out, he is a very shitty boss, and nothing is getting done.

Three Christmas-Carol-Style ghosts cast a spell to help him examine the limiting beliefs he holds in his mind. They slow down his thinking and turn each of his thoughts into its own card, to be added to the deck his life plays from. He's tired of being dealt a bad hand, day after day. It's time to discard the damaging thoughts, and stack the deck in his favor.

$5 of $50 per month
When that counter hits $50 a month that unlocks a world of possibilities because you'll have helped cover the cost of the Adobe Tools monthly subscription that I have to buy in order to get access to certain software to help build this thing.