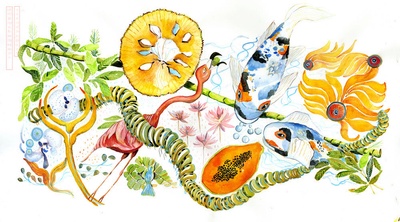 - One  water-based artwork a month

- My undying gratitude and appreciation

A few years ago, upon returning from a life-transforming, two-year backpacking trip around the world, I started agonizing about what to do next.  How could I ever go from ancient sacred sites, studies of elder civilizations, enlightening conversations with fascinating human souls, nights spent under the milky way in Arequipa, or searching the skies for UFOs as in Kuccukkuyu, Turkey or Sedona, AR... back...to a bleak...uninspiring life... without losing my soul?

One night, I had one of these lucid, vivid, Jungian dreams of the third kind. One that was so powerful, if I wasn't convinced other realms existed before, I would have become a total believer after that. The entire dream rolled out like the archetypal "hero's journey" you see in every immemorial mythology, fantasy movie or a Neil Gaiman book.

In it, several camouflaged jeeps were crossing an arid desert. I and everyone else in my group were bone-tired, thirsty, dusty and hopeless.  We stumbled upon an oasis where our host proceeded to double-crossed us. I managed to escape with my life.   I arrived at the proverbial crossroad, where a number of wraiths-like things were waiting for me. One of them looked oddly like my godmother. She offered me two choices:

One, I could exit out of this "scene," through a portal I would find at the top of an imposing stone staircase. It was carved from the side of the mountain and was adorned white wooden slats. Decorative, wrought-iron railings were erected on the left side. I couldn't miss it.

Two, I could climb a sheer mountain wall to freedom instead. The wall was so smooth, it reminded me of granite countertop slabs that fell down from the sky violently and somehow managed to stay vertical. Some were the size of the stones used to build Sacsaywaman in Peru. I could barely see any footholds - on any of them.

Right then, a sinking feeling found its way down to the pit of my stomach. It reminded me of the time, when I was paralyzed with terror, because the paved andean trail I was walking on, was exactly the width of my two feet. On my left, the mountain felt perpendicular to the ridiculously narrow stretch of solid ground I was desperately clinging to.

On my right, the gorge was so dark and deep, I couldn't see the ground. That's exactly how this granite monstrosity felt to me now.  The comfortable and safe staircase was singing its swan song - but I knew. I couldn't listen to it.  Resigned to my fate like a convict, I chose the cliff.

Midway up the mountain side, sweat obscuring my vision, my heart pounding in my ears, and precipitously hanging from two fingers, while my toe was frantically seeking a nonexistent foothold, I remember cursing at my own stupidity. Why, oh why did I do this to myself! I could see how, any minute now, my fingers would be so tired, they would let go and I simply would fall down to a bloody and undignified death.

Then, in the next second, the whole thing made sense. I understood that ALL the events that led to this moment in the dream, was a simple simulation. I needed to get a taste of how truly, horrendously difficult things could get in the other life (my "conscious" reality), should I choose to break away from the conventional and the predictable.

Should I take up the challenge and commit to a path steep in creativity, design and art, the rewards could potentially surpass my current trials and tribulations. As soon as these series of concepts "came" to me, like in the movie Matrix my body froze, slow-mo, into mid-air.  All around me, light started to pulse and grow, atoms separated. With a 360 degree view, I saw specs of frozen light dust the air. Don't know how else to explain it. One moment I was here, and the next I was gone. Poof. Disintegrated.

I re-assembled on top of a terrace. It felt like I crossed over into another country that tasted a little bit like Russia but it had colorful buildings with thick fretwork, as in Amsterdam. In addition, in the paved square, just a few steps away from me, a packed souk-style market, reminiscent of Istanbul, crawled with bustling merchants and pedestrians. Its laid-back atmosphere surprised me.

I had appeared crouched in a battle-ready position, so I felt a little taken aback at the lack of imminent danger. Behind me, an elegant concrete railing ran along the ridge of the terrace. It protected meandering passersby from plunging inadvertently into the misty depths below I had just escaped from.

A serene-looking female spirit guide, who looked like an old friend of mine appeared at my side -  no warning, whatsoever. I startled back to attention. I don't remember quite what she said but she wanted me to followed her. That part was clear and I did. Into the labyrinthine paths of the market I went, all the while understanding lucidly, that she represented an archetype that would lead me to finding the answer I was seeking. She was, literally, showing me the way.

Finally, we ducked under a striped white and blue awning, that looked as if it was nearing the end of its life. We entered into the gloomiest, unassuming, nondescript bookstore I'd ever seen. Shelves overflowing with old books, from floor to ceiling filled the space and covered every surface. A thick layer of dust sat on everything. Here and there, the mummified heads of unknown beasts, adorned the walls.

A shaft of light must have hit my eye just at the right time because I noticed the "book."  It looked ancient with scrolls that simultaneously reminded me of Celtic, Aida and something else. It felt like it manifested at this precise moment, in this dream state, only for me to discover it.  The "MuNaGenou," the book of dreams and destiny, had wanted me to find it.

The striking design on the cover was what originally stopped me in my track. In black and white ink, inside ropes of celtic knots, shaped into several circles, nested within a square, floated a little girl with braids the size of my arms. She was embracing her knees in a foetal position, as if she was waiting to be born.

All became crystal clear. That unborn child represented eons of ideas, untapped creativity and unexpressed artistic gifts smothered under millenniums of willful neglect. Predictably, I woke up from the dream at that exact moment. My mind was still full of the sequences and the details of the dream. I wrote it all down so I wouldn't forget.

In the end, it was so simple. I had to reclaim my creative and artistic potential through a holistic journey. Balancing the world with hope, serenity, light and positive energy would require grit and perseverance.  If I'm able to achieve that, like that other guy said, it would open up a new world - if I can take it.