Who am I?
My name is Saffron. I've gone by several other names over the years (Saffy, Saffire, etc.) but the point is, I've been a presence on the internet, making art, for over ten years. Here's my tumblr art tag, and here's my currently inactive deviantart-- and here's my portfolio, too. I'm currently living in Portland with the love of my life, but finding steady work as a freelance artist is especially difficult when you don't have a finished art degree. I would like to share my life-project, a webcomic/serial called Earth and Moon, but our current struggles with money just don't give me the time.

What do I do?
I'm mainly a digital painter. I specialize in sketches, pinups and concept art, but I've also been trained in graphic design. I've been making comics for ten years, but nothing has been successful because of how busy I was. On the whole, I'm trying to broaden my skills so that I can make comics and do character design/concepts for a video game company sometime. (That's kind of a pipe dream though.) I'll just be happy if I can share my art with everyone who wants to see it.

What's this big project?
Earth and Moon is set in a fantasy world populated with creatures of many different creeds. Eight years of worldbuilding and writing means that there are several races, cultures, and languages spanning a thousand year timeline. It begins when a mysterious boy with no past or future runs into a passionate healer girl, but the war around them forces them to depend on each other. As they seek to change their fortunes, they encounter a cast of diverse and memorable characters, including those of other races and sexual orientations. 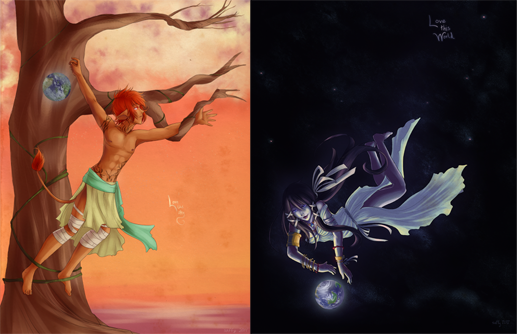 The script is not finished at the moment, but the first chapter is nearly completed and ready for storyboarding. I've brought my best friend on board to help me write the thing and do flat colors. I will be doing storyboard, inking, and some coloring myself (my friend will do the rest). I also have some html/php experience and my own domain to ensure that I will have a functioning site to host it on. Earth and Moon will be updating at least once a week-- I'm hoping three-- when it's ready and launched.

While it's not the main point of the story, it's worth noting that mine is the only webcomic I know of to be written by a lesbian and a trans person.

What else are you doing?
If you're not interested in original characters-- which is totally fine-- I'm fairly active in the fanart community on twitter and pillowfort. I frequently do commissions of Final Fantasy XIV and Warcraft characters, Tales of, animated movies, and draw a lot on my own.

Ensuring I meet my financial goals means I can:
- do commissions or requests for you and your friends
- work on the E&M script
- launch the comic months earlier than I projected
- post comic pages on Patreon before they are colored
- host regular livestreams
- publish art tutorials/process
- make wallpapers

... and much more! I'm always open to suggestions for more rewards for you guys.

Every bit helps.
Thank you for reading this. Please consider giving, if you can! Even a dollar goes a long way. Thank you so, so much! ♥♥♥♥♥