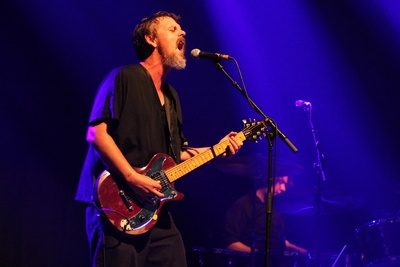 $3
per month
Join
Exclusive access to my solo work.

The reclusive Creston Spiers, founding member - along with Stephen Tanner and Paul Trudeau - of legendary southern sludge-rock band Harvey Milk has emerged with a brand new batch of orchestral compositions (yes, you read right), heavy rock, and huge slabs of the feedback virtuosity that has made him a world renowned master of the electric guitar.

Kyle Spence. who replaced Trudeau on drums for much of the band's tenure, was asked to comment on Spiers's return to composing. He had only this to say: "Who?"

This reporter was lucky enough to corner "Larry" (as Creston is known to his closest friends) coming out of school one day. "How are you able to offer such prolific orchestral output, the heaviest of heavy rock, and chunks of insane guitar virtuosity, all at  the low, low price of only $3 a month?"

Creston looked at me as if surprised and replied, "What?  That can't be right. Who the hell told you that?!"

I think that says it all.

Not really. The simple truth is I'm prepping for Planet X and refuse to do anything that I don't love anymore. Besides my wife, daughter, and grand daughter, music is the only thing. So I make this bargain with my "patrons:" new musical selections (orchestral/ensemble compositions, songs, noise, etc.) every month for 3 bucks starting July 1st, 2017. In exchange, I would stand a fighting chance of make a living wage from music. I would ask for no more.

Why this way, instead of selling downloads on bandcamp? I guess its more of a political/philosophical statement than anything: Like in the days of valued trade-smiths, I believe an artist/craftsman's relationship with their customer is a personal one, and a valuable one. It should not be easily stolen and distributed, leaving the creator often the last one to profit from their art.

I can only hope that some will find my craft worth the fee.