is creating his first solo gallery exhibit of Lovecraftian artwork.

The Basic Tier is an affordable entry way to show your continuing support on a monthly subscription basis. At this level supporters are publicly thanked and acknowledged every month, given access to exclusive, patron-only commentary, special sneak previews of work-in-progress and a digital invitation to the gallery exhibit opening. All other tiers receive these benefits as a regular part of their package. 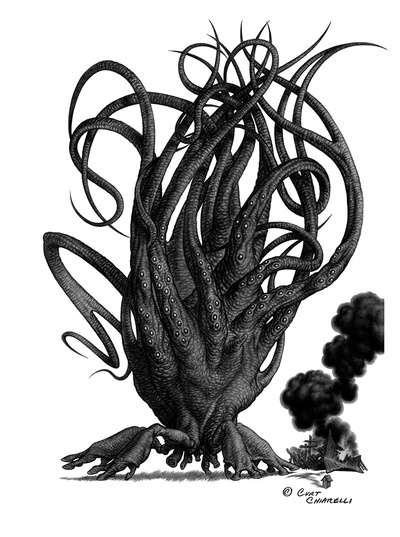 - Monthly public thanks and acknowledgement for your continuing support;

- A digital invitation to the gallery exhibit opening; and 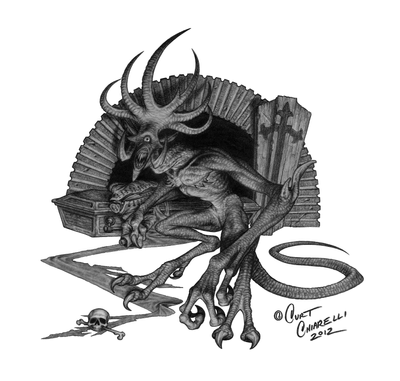 - Monthly public thanks and acknowledgement for your continuing support;
- Monthly access to exclusive, patron-only commentary and special sneak previews of works-in-progress;

- A digital invitation to the gallery exhibit opening;
- High-resolution digital downloads of all four (4) black-and-white drawings in PNG file format;
- High-resolution digital downloads of all four (4) color paintings in PNG file format; and
- Your choice of one (1) signed limited edition, 11 inch X 14 inch, unframed print out of four (4) of my black-and-white drawings mailed to your street address for every month you continue your subscription (i.e. if you subscribe for four months you'll collect all four prints). All prints are strictly limited to fifty (50) copies and (like the digital downloads) are only available once the artwork has been completed. Once they're gone this option will no longer be available. Please note that all prints are made on premium archival-quality paper and shipped flat. The sizes given are the dimensions of the paper, not the actual image size.

First up I'd like to thank everyone who took the time to visit this page. YOU are the reason artists like myself are able to continue creating! Okay, I suppose you may want to know a little about my background. So here goes:

I've been making my living as a designer, illustrator and sculptor in the motion picture/television, themed entertainment, museum exhibit, video game, toy/collectible, advertising/marketing and publishing industries since 1986. When I was a sophomore in college I received my very first paid commission doing storyboards for the McDonald's Corporation. Before graduating from Columbia College, Chicago with a Bachelor's Degree in 1989 I had already received commissions to illustrate two fantasy war-gaming modules for Mayfair Games and production designed two motion picture features, one of which was a comedy pilot for HBO.

In 1991 and 1992 I was hired by Williams Electronics to create the stop motion animation models of the characters Goro and Kintaro for the Mortal Kombat video game franchise. After a stint working in the design and fabrication department at the John G. Shedd Aquarium in Chicago, I moved to the west coast in 1994 to participate in the creation of the stop motion characters for the Walt Disney animated feature, James and the Giant Peach.

Since then, I have expanded my activities to toy/collectible design and sculpture for such companies as Hasbro Toys and Lucas Licensing for their Star Wars action figure line, Disney Consumer Products, The Franklin Mint and the action figures of Cortana, the Covenant Grunt and the Covenant Elite for Microsoft/Bungie Studios' Halo video game product line, amongst many others.

My artwork has been featured in the Spectrum: The Best in Contemporary Fantastic Art anthologies and the television special effects that I have been involved in creating have won multiple awards, including a Cannes Bronze Lion and an Emmy nomination.

Since 2004, my scope of activity has included the writing of three books, teaching advanced-level university art courses and, now, gallery art. Beginning in 2007, my work has been featured in juried group exhibitions at the prestigious Providence Art Club, the Woods-Gerry Gallery at the Rhode Island School of Design and many other regional art galleries in the Portland, Oregon metro area.

Concerning this new project: in many ways it represents a full-circle return to my roots. My relationship to the works of H.P. Lovecraft began when I was fourteen and it was pivotal to my development as an artist. In Lovecraft, I recognized an artist of extraordinary intellectual scope, power and originality. The confluence of his stately 18th century prose style, the 19th century nihilistic philosophical undercurrents, the mystery and majesty of the 20th century's scientific advances, the dark, operatic grandeur and the epic, throbbing sense of alienation and apocalyptic doom spoke to my sensibilities on a deep level. The themes Lovecraft explored were intensely personal, yet universal - themes which have only grown more potent and relevant as we move deeper into the 21st century. Here was a man who straddled a paradox and made it his home: someone who already was an anachronism in his own era, yet who anticipated and articulated much of what we experience today in our modern world. The stars are now right to pay proper homage to this literary master who, like Franz Kafka and Friedrich Nietzsche, gave us the lens through which we view and comprehend our lives.

$0 of $1,000 per month
I am now embarking upon interpreting the stories of literary horror master, H.P. Lovecraft in my first solo gallery show titled, Cosmos of Terror. Drawing upon my years of professional experience with several different kinds of media, my goal is to create approximately twelve themed pieces of artwork (four paintings, four drawings and four sculptures) within a three year period; interpretations that offer a fresh, original and darkly atmospheric take on the Cthulhu Mythos.

I'm already off to a good start: The character and environment design phases are largely completed. Four drawings are done (The Elder Thing, Shoggoth Rampage, The Dunwich Horror and Pickman's Model), with the last two framed and matted. The next phase of this project will be to tackle the sculptures (Cthulhu Rises, Night Gaunt and The Elder Thing). After that stage is completed, I'll begin work on the paintings (Cthulhu Rampant, Black Man With a Horn, Water's Edge and The Grotto). My sculptural interpretation of the Yithian from The Shadow Out of Time is now currently in progress.

In summary, to defray my overhead expenses during the period of time needed for the creation of this artwork, I will need to raise $1,000.00 per month. Thank you for your kind support!