is creating A Fan Site & Social Network for Life Is Strange

Lurker
$5
per month
Join
Just want to help us out a little? Love browsing the site but don't really have time to be as active as you'd like? This is the perfect Tier for you.

You will receive a personal Thank You and mentions on our Social Channels.

- Your User Role changed to Grahamfielder on the LISF website and Discord server, giving you access to an exclusive Chatroom for Patrons only

- Early access to news about upcoming Contests and Events

- Your User Role changed to Marshian on the LISF website and Discord server, giving you access to an exclusive Chatroom for Patrons only

- Early access to news about upcoming Contests and Events 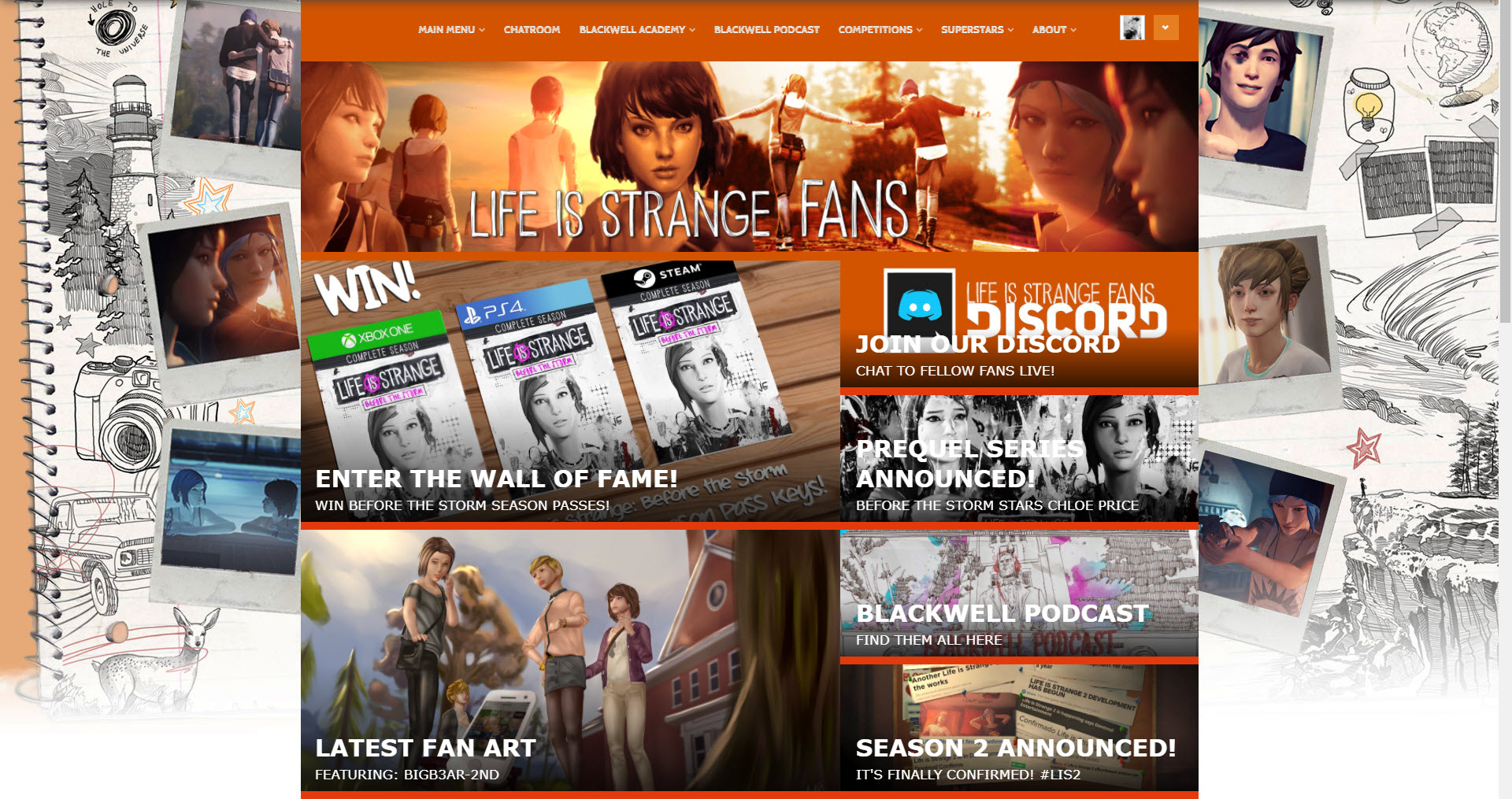 Life Is Strange Fans is a Fan Site & Social Network for fans of the videogame Life is Strange. It has been up and running since February 2016 and we now have over 3000 Members as well as large followings on Facebook and Twitter with more than 7500 Page Likes and 8500 Followers respectively. It was created by 1 person: me, Chris Anderson. After playing the first episode, I spent a year learning how to create a Wordpress-based website with all the features I wanted, including Profiles, Activity Walls, Friend Requests, Media Uploads with Liking and Commenting as well as arguably our most popular feature, a Live Public Chatroom for fellow fans to engage in real time. This Chatroom will temporarily be replaced by a Discord server.

The bigger the site becomes, the more media it hosts, the more features we add - it all costs money to maintain. Currently, the costs to run and maintain the site are paid by myself, with occasional support via Paypal donations from regular Members of the site. Even on a good donation month, I never break even and it has always cost me money to run every month.

Our Competitions are another big part of our site and the wider community. Creating the videos and promotional material that supports these contests takes a lot of time and effort. Sometimes, it involves our Co-Admin and Staff Artist Mai, creating artwork for the promo posters. Sometimes it involves me creating videos with motion graphics and animations with a unique theme and that might involve purchasing After Effects templates to use as a starting point. Our subscriptions to Photoshop and After Effects are also paid monthly.

Take a look at an example of one of our Contests in an Announcement Video for our Fan Fiction Prequel Comic Contest here:

Sometimes, we are lucky enough to be provided with prizes for these Contests, either by Square Enix, Dontnod Entertainment, Deck Nine, or fellow Fans who are kind enough to donate prizes to be given away. The majority of the time, however, the prizes are paid for by myself with my own money. And they are never small prizes. They range from clothing merchandise to Steam vouchers to custom-made items such as a replica of Max's Polaroid camera. Unlike Square Enix themselves, who are sometimes limited to which countries they can open their giveaways to, we open our Contests to everyone worldwide, and since we also pay shipping costs ourselves (when the prizes are not provided by the official Publisher) this can also be very expensive.

The reality is I only have a part-time job as a Stock Controller at a supermarket. With the usual bills and rent I have to pay each month, that doesn't leave much for the site at all and when the site money is taken off, most months that doesn't leave any personal income for socialising at all.

What does it cost to run?

Here is the breakdown of exactly how much it costs to run Life Is Strange Fans each month:

Hosting: Life Is Strange Fans is a social network with a lot of intensive features that requires a robust and reliable server in order to handle everything; every Friend Request, every Browse through a Gallery, every Upload, every Like and Comment on Media, every Vote in a Poll – all of it and more calls for something more reliable than Shared Hosting. Life Is Strange Fans runs on a Linux VPS Hosting environment by UK company TSOHost:

Cloudflare – Local Server Distribution: The website is hosted in the UK, but we have members from all over the world. As such, we use Cloudflare to distribute the website from servers local to you.

New Features: Some features are too difficult to implement with plugins or would work better if implemented into the site natively. This would mean paying programmers to work on these new features.
Website Optimisation: The website relies heavily on plugins. The more plugins you have the more stress it puts on the site and the performance can suffer. Some plugins can conflict with others too, which can also affect the performance of the site. We could pay programmers to not only optimise the site but actual remove the need for some plugins by implementing their features into the site natively instead.

More Competitions: We aim to try and have at least 1 major Contest a month, but we would also like to have more short improvised Contests such as the recent ‘Rachel Amber Missing Posters’ Contest. More funds would allow us to do this more often.
More Prizes/Better Prizes: We’ve been able to provide what we hope are great prizes so far: a custom Polaroid camera reminiscent of Max‘s from Episode 1, Amazon Gift Vouchers up to a $100 value, Steam Gift Cards and of course, we’re lucky to be provided with some of the Official Life Is Strange Insert Coin Clothing by Square Enix, but we may not have these sort of prizes provided to us all the time. With donations, we could also pay others in order to provide some more unique prizes such as a personally commissioned artwork created and signed by our on-site Staff Artist!

What will I get in return for helping out?

Please take a look at the Reward Tiers. Rewards range from Wallpapers to unique Roles on-site/in our Discord Server and even a free Mug at the highest Tier.

Why should I pledge my support?

This is only the beginning of a strange and wonderful adventure...

Our hope is to keep the site running and continue to improve it throughout the release of Life is Strange: Before the Storm, Life is Strange: Season 2 and beyond. With your help, we can make that a reality.

With this amount we can pay for monthly VPS hosting, keeping the site running at an acceptable speed, with most features.
1 of 3